THE COLOUR OF LOVE

I mentioned in my last post that we were going to make attempts to scoop up "Red", a very handsome orange tabby who is a stray in our neighbourhood so that we could have him neutered and vaccinated and work towards finding him a home. I'm thrilled to report that last Sunday, hubby and I were up at 6:00am (which is right about the time Red appears on his morning stroll), and after about a 30 minute wait, Red showed and the process began. We were somewhat anxious initially as we waited for him since we'd already made the appointment at the clinic to have him there for 8:15am that morning; a little advantageous of us I know, considering that we had no guarantees this boy would show up in time for us to make that cutoff time. It was abit nailbiting at first, waiting, but thankfully prayers and finger crossing worked, and there he was.

He happily trotted along after us as we coaxed him to our side of the street, and almost instantly stepped into the carrier as he followed the trail of treats. It was so easy, it was almost unbelievable - the really tense time came as we waited for the 1 hour to tick by before we could take him in.........he was NOT pleased about being in that carrier and there were moments when I thought for sure he was going to break out of it!

True to creamsicle kitty form, his little voice was hoarse from meowing so loudly but we made it to clinic without any major problems and picked him up 8 hours later. He handled the surgery superbly and except for a very sore looking nose which he rubbed raw on the bars of the carrier, he was great and it was all over. 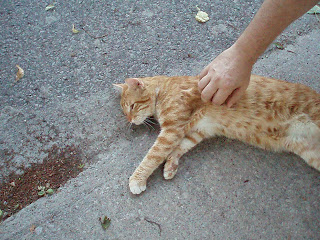 The pictures enclosed within this post are all taken AFTER he's home and back out in the neighbourhood; sadly I don't have room at my house to foster him right now and so we had to let him back out after a night of resting in our finished basement. Thankfully as the shots attest to, Red hasn't held a grudge at all - true to his amazing character, he's as loving and friendly as before and there's no hard feelings.

Now the job begins of finding him a home or a foster space. Word has begun to spread about this little boy's plight and I hope that anyone reading here will also pass along his picture and story. This is an AMAZING cat, both in temperment and fortitude - he has survived thus far against all the odds, and at approx 2 years of age, he has alot of life ahead of him that we want to do our utmost to ensure he gets to enjoy. 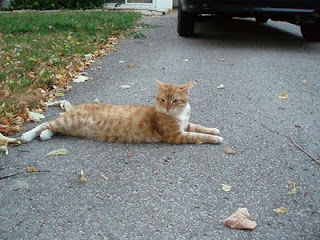 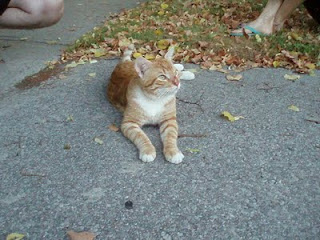 Posted by Safe Haven Hotel at 6:01 AM