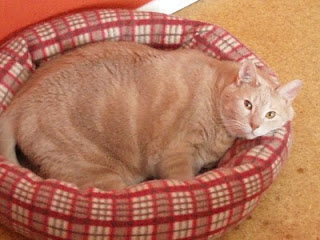 Every once in a while on this journey through life, you'll encounter something that ends up being waaaaay easier than you ever dreamed it would be. In fact, it's so easy, you might even catch yourself saying, "I just can't believe how easy that was" - "Why was I so worried?"

That is exactly how things have unfolded with Farley. When I got the email that indicated he was sitting in a shelter downtown and the vet overseeing his care had great concerns about him spending any time at all in a cage due to the fact that he was just going to gain more weight.......I thought to myself, hmmm how heavy can this cat be that a animal doctor is worried? Then afew days later, when we actually went to pick him up and our contact at the shelter remarked on how "large" Farley was, and then the shelter staff came over and gave me a mound of paperwork that talked about how "large" he was, I have to admit that there was a little voice asking myself, okay just what have I gotten us into this time?. All of this was further exasperated by the fact that when I went to lift our carrier with him in it, my first knee jerk reaction was holy moly this guy's heavy!!!!
I literally had images of a grotesque, overweight cat that laid around all day and simply waited to gorge on his next meal before heading back into a food enduced slumber.

Farley is "pleasantly plump" as I like to call him, but he is otherwise just an all around amazing cat. I wish his former family (the ones who referred to him as lazy in their surrender papers), and the shelter staff could all see him now. He's been here just over a week, and although I can't attest to his former self, I can tell you that this boy since being in our home has been playful, engaging, ACTIVE, and just downright adorable almost every second. He likes other cats, he loves attention, he's thrilled by toys and yes, he does enjoy his meals, but not in a gorging sort of way by any stretch of the imagination - why he even purrs while enjoying his breakfast and dinner!

This has absolutely been one of the easiest fosters we've ever had stay with us. I use the past tense here because I'm sure come my next entry, Farley will be in his forever home - oh did I neglect to mention that he has two separate families interested in adopting him? Yes TWO............not bad for a BIG FELLA wouldn't you agree?? :))) 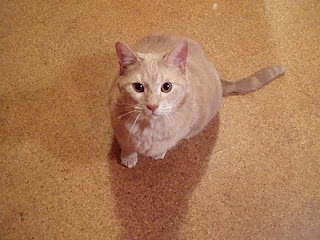