It's always difficult when an adopter calls and for whatever reason, wants to return the precious friend that you entrusted them with. 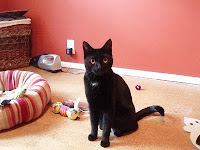 Well this is exactly what has happened to Rascal. Rascal is not a former foster of ours (not that that matters), but he was one of our rescue's and was returned just the other day. Normally, we try to hold fast to our rule about only 1 foster at time at our house, but this situation seemed okay since we were only taking Rascal in as an "assessment". It was claimed that he had some litterbox issues and so we were going to take a few days to evaluate just what those habits were.

Rascall has been with us not even quite two nights and we are............well, in love. This has got to be one of the cutest little guys to ever grace our home, and his disposition is equally as adorable! He's already out and about with the gang, and so far, things have gone quite smoothly.

It's right about now when I watch Rascal exploring and chatting and getting acquainted with everything in our home, that I thank God that his former family didn't keep him - because to be brutally honest, they didn't deserve him.
If Rascal had been a human child, I wonder if they would have felt that they could simply call up the adoption agency and tell them that they'd changed their mind.....not likely, and that's for a whole host of reasons. But some people seem to think that animals are expendable, that if things get rocky or rough, or difficult, the only option is to go back on your promise to love them forever and simply hand them back like a screaming child that's just messed their diaper.

Rascal is a little charmer and we're so delighted that not only do we get to have time in which to get to know him and love this little tyke, but that we were the ones lucky enough to be able to accept this return!!
Posted by Safe Haven Hotel at 4:40 PM