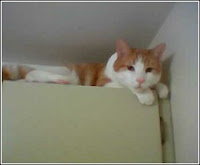 I have always loved orange cats. They don't have to be solid orange, the one's that are mixed with any type of white, I have always referred to lovingly as my "creamsicle kitties".
I may be dating myself here but there used to be these popsicle's that were hard orange on the outside and once bitten into, were filled with a lighter, white ice cream inside - thus a creamsicle..........and they were good!!

The two main orange cats that came into in our life since fostering began, are Chester (the handsome boy at the top whose gazing down from his favourite spot on our then kitchen cupboard), and Sawyer (in the bottom photo, who at the time this was shot, had just discovered the birds on my back deck).
We had lost Marty only several weeks before and were still grieving horribly. There was a small "shelter" (and I do use that word very loosely) being run out of a storefront just afew doors down from where we then lived. Chester had evidently been found in an apartment, abandonded when his owners moved away and left him - NICE.

I had found it painful enough to walk by since Marty's passing, and made a special point of actually turning my head the other way when I knew I was approaching. But this particular day it was a steamy July afternoon and as I began to pass the front of this place, my eyes looked in and I saw the saddest site. There was a full grown, large, orange/white cat stuffed into the tiniest cage I had ever seen. I went in immediately (I know, I know, it's always over the minute your feet take you in), and learned that this gorgeous 7 year old male had been left alone for almost 1 week in an apt that had been vacated by renters.........I guess they decided that he was packing they didn't need afterall. The cage he was crammed into gave him only enough room to squat - and he was terrified. There was no air conditioning in this place he now found himself in, and worse still, they had him in the front window, with the front door open and traffic as well people in loud abundance!
I don't remember if I even patted him, but I am positive that I was only 2 mins in that smelly, horrible place before I told them that I would be right back with a carrier and that he'd be coming home with me.

My husband was hot on my heels as we headed back down the street with carrier in tow, I paid the adoption fee, took the medical record and homeward bound we were. We renamed him Chester and although Miss Remy was furious, this boy was so grateful. At the time, he needed a home and I needed (although not realizing it right then and there), something to heal me from Marty's death............it was a win-win.

We learned 6 weeks later that Chester had cardiomyapathy - a heart condition. Upon further testing it was determined that his was very serious - although he acted and appeared totally fine in every sense of the word, his heart was seriously damaged and the vet estimated that his lifespan would be cut very short as a result.
To say that we grew to love him would be an understatement, and true to form, he loved my husband. He slept with us every night, eventually got on the good side of Miss Remy (how I'll never know), and took his spot on the pillow next to her above Steve's head where Marty had once laid..........it was love, love, love. He was also the little ambassador to all our fosters as we began volunteering - he was laid back, friendly and confidant, with a touch of sassyness thrown in (every orange male has to have it), everything you want in a resident cat.

After two years to almost the day he became a member of our family, I came home one wintery evening from work and found my husband in tears. Chester had gone into heart failure and was literally gasping for air. A rush trip to our vet quickly determined that he was suffering horribly, and in all likelihood would deteriorate over night. His prognosis was very grim and his current state very grave.........it was then that we made the decision to bid him goodbye.

In contrast, the call came to help Sawyer from the previous rescue group we worked with. There was an older woman whose daughter could not keep him, and although an older male neighbour had agreed to let him stay with him, it wasn't working out.
The Saturday I picked Sawyer up, I didn't know what to expect. It was already known that he had had a rough start so I braced myself. We entered the elderly man's home and they called him.............what came barreling from the back of the house at full speed, with the cutest little pink collar around his neck and a tinkerbell dangling below, was the sweetest, friendliest, most adorable little cat I'd ever seen. He was a full grown male but at 5 years of age, he couldn't have weighed more than 6 or 7 Ibs.

It was quickly apparent after bringing Sawyer home, that he was not in good shape physically. It was decided that a trip to the vet was in order and so the appt was scheduled and off our little foster guy went.
The news however, turned out to be even more grim than it had been for Chester. Sawyer was also suffering from cardiomyapathy - sad as it was to hear. The only difference was that his was much more serious than Chester's because he was exhibiting physical signs of fatigue, shortness of breath, and open mouth breathing -all very bad signs. It was also discovered that he was FIV+ and since my boys were not known to be carrying that virus at the time, it was decided that Sawyer would have to be moved to a foster home or permanent home where he could be the only kitty or reside with others who were diagnosed with FIV as well.

Believe it or not, someone did step forward - a lovely lady who offered Sawyer a forever home for whatever time he had left. We were overjoyed, but also deeply saddened and the day that Sawyer left for transport to her home, I had myself a serious crying episode in having to accept the fact that he couldn't stay with us.

They loved Sawyer and he appeared to be his happy go lucky self, never missing a beat once the move was complete. Sawyer died very suddenly in his new Mommy's arms in their kitchen.............two weeks after becoming a member of their family.

Do I think that Chester & Sawyer were coincidences that entered my life? - absolutely not. Do I wish that I had done things differently to avoid the pain that came with losing them both so young and to such a horrible disease - never.

They were, are, and always will be, our creamsicle boys. We treasure their memories and remember them always, and yes, every Summer we try to have a "creamsicle" in their honour as we remember what happiness they brought to our lives.